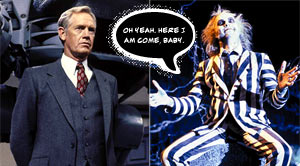 On Monday, we brought you the news that Hugh Laurie had decided not to take on the role of the villainous CEO of Omni Corp, the company that makes RoboCop, in Jose Padilha’s titular remake.

Today, darlings, we bring you the breaking news that Jose Padilha, who had described the making of his movie as “hell” to a friend of his, who then disclosed their conversation to a Spanish news source, which was then published on a U.S. website on Monday, has perhaps finally found an end to his movie woes in none other than Batman!

Ok, well not actually Batman, but, kinda Batman. And by “kinda Batman,” I mean Michael Keaton has signed on to fill Hugh Laurie’s evil villain shoes! How kick ass is that?

It was reported earlier this evening in Deadline, that Padilha had the following to say about Keaton’s joining the cast:

“Michael is the final addition to the amazing cast we have assembled for this film and it is so great to have the last puzzle piece in place. It is thrilling that everything has come together to bring this innovative new vision of RoboCop to life. We’ve got a great script, a great cast, some killer ED-209’s and I can’t wait to get Alex Murphy back on the streets.”

Though I’m no fan of remakes, I’m actually getting more and more excited about this particular movie. There’s just something about Samuel L. Jackson, robots, and Beetlejuice that touches me deep in my soul, ya know?