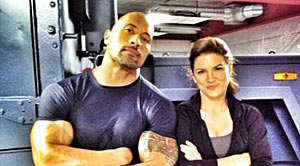 I had no doubt in my mind that Gina Carano would return to the big screen before making a comeback fight inside the cage. It still seems fair to say that her last fight in the MMA with Cris Cyborg before stepping over to Hollywood left a permanent scar, and forced her to re-evaluate her future as a contender in STRIKEFORCE.

A few months ago, Gina Carano has been negotiating a deal to be cast in The Fast and the Furious 6, and “The Rock” (Dwayne Johnson) pretty much confirmed his new partner in the movie when he tweeted the following message along with the photo on Twitter: