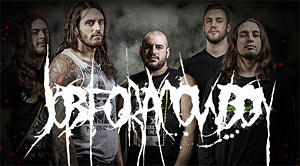 When we sat down to talk to Jonny Davy of Job for a Cowboy, the band had recently finished its set at Heavy MTL 2012 – and man was he rank smelling. I kid of course, but he hadn’t showered yet. If you’re a metal chick who likes sweaty metal heads, here’s a moment for you to reflect…

Obviously, we talked about Job’s latest album, Demonocracy, but we also touched on the band’s lyrical styles, which deviate from death metal’s normal themes. And despite the gravity of their lyrics, Job for a Cowboy is a surprisingly fun band. Don’t get me wrong, fun doesn’t mean that they’re not heavy – they’re heavy as fuck. They also do what I like in my heavy music, they have intricate parts that are amazingly detailed. I especially love discovering those parts when I’m already familiar with a song.

Jonny Davy and I also talked about music piracy. In researching the interview, I came across something he said about piracy that intrigued me and struck me as the best defense I’ve ever heard, so I had to follow up with him on it. Also, don’t get me wrong again, I’m against pirating albums. I think fans should buy albums and support the bands they love and the labels (yes, the evil labels) because they are the ones who market the bands and help them tour to your neck of the woods. You should also buy merch. And that’s the end of my soapbox speech.

Enjoy the video interview with Jonny Davy of Job for a Cowboy.