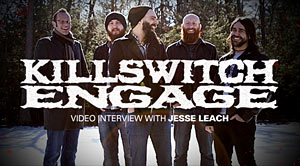 Recently reunited with Killswitch Engage, after a decade apart, Jesse Leach isn’t taking prisoners. From our interview with him at Heavy MTL 2012, we were able to infer that he’s 100% dedicated to his current band and establishing a new future with them.

We did ask some follow-up questions from our interview with him last summer at Heavy MTL 2011. He was there supporting his other band, Times of Grace, and when we asked him about that project he confirmed that it’s still something he intends to pursue. However, when he’ll get to that is another question.

In the interview trailer, Jesse Leach the foodie did comment on the catering at the event. All the bands commented on the catering, and all of them said that you just don’t get that quality in North America – maybe Europe, but not North America. Jesse also said last year that he had dreams of opening his own restaurant someday, and when I asked him off camera if it had happened yet, he said that it’s a good dream, but one that probably won’t happen.

For now, Jesse Leach is just extremely happy to be playing with his friends again. Sure, he could have been giving me lip-service by saying that, but when I saw him on stage, it couldn’t be clearer that he’s perfectly content and happy to be with Killswitch Engage again. Not even the downpour that started when they hit the stage could wash away his joy. He just has a youthful energy, a boyish charm, and a rock star’s charisma, all of which make him perfect for KSE.

As to be expected, most of the songs on KSE’s set list were from the first two albums (with Jesse Leach on vocals), but there were smatterings of Howard Jones-ear in the mix as well. Most notably, “The Curse” and “Holy Diver,” and Jesse delivered those with authority.