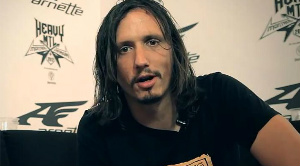 Gojira was clearly a highly anticipated band at Heavy MTL 2012. We scored an interview with drummer Mario Duplantier, who gave us some background on the band’s name and the reason for the change from Godzilla. He also gave us some European insight on the Randy Blythe situation and what the future holds for Gojira since the tour with Lamb of God has been cancelled.

Gojira was one of the bands I was most excited to see at Heavy MTL, and I was really stoked to land an interview with Mario Duplantier. I was also really impressed with the audience response to them and how they literally flocked to the stage like moths to a flame. Their set burned bright, and was nothing short of spectacular.

Gojira played just seven songs, which was at least seven songs too short and left me feeling like a high schooler unable to close the deal. Three of the songs were from their latest album, L’Enfant Sauvage, and the rest spanned their three most recent albums. The set, however, was structured to impress; it displayed their brutality (“The Heaviest Matter of the Universe”) and their technical prowess (“Oroborus”; “Explosia”), and sometimes both at the same time (“Backbone”). While Gojira’s set was too short, it was perfect in the sense that it introduced the band to many people who’ve probably never heard of them, and it left everyone wanting more.

Gojira’s L’Enfant Sauvage (released June 26, 2012) is an amazing album. It’s receiving a ton of critical praise and it’s potentially the metal album of the year. If you haven’t already, you need to check it out.