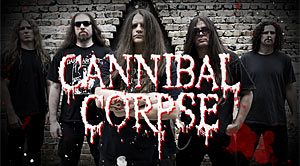 Before sitting down with Paul Mazurkiewicz (drummer) of Cannibal Corpse at Heavy MTL 2012, I made sure to say a prayer, pocket some holy water, and start a relationship with God. God turned me down, so I was on my own. Not even King Hazard was willing to lend me a helping hand if Paul were to drag me to hell to be strung up by my entrails and left to be nibbled on by Satan spawn. Yup, I was going in as the sacrificial lamb.

Actually, Paul (yeah, I’m now on a first name basis with him) was super friendly, as you’ll see in our video interview. Seeing him on the street, you would never guess that he was in a death metal band, much less a progenitor of the metal sub-genre. He looks more like the type of guy who rides his bicycle around town doing his grocery shopping at farmer’s markets over the weekend.

A few hours prior to the Cannibal Corpse set, we talked about Torture and touring and the state of death metal today. I also told him Cannibal Corpse was getting soft in their old age – then he proceeded to beat me with a homemade mace. As for the extreme metal scene, Paul is proud to see it grow and sees it as something positive for metal on the whole, but he prefers what Cannibal Corpse does.

During the course of the interview, I got Paul to point the finger at George Corpsegrinder. Yeah, it might not be a very cool thing to do, but once you see what he’s pointing the finger about, I’m sure you’ll be like, “Oh, yeah, that makes total sense.”