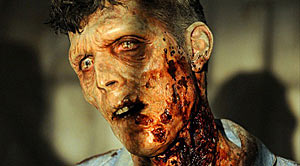 Season 3 of The Walking Dead heads back to AMC on October 14, 2012, and here are two new zombie pictures that flaunt the skills of award-winning special effects studio, KNB EFX. As a bonus, we have included the video clip below of a deleted scene from Season 2 in anticipation of the Blu-ray release of The Walking Dead Season 2 set to arrive on August 28th.

Check it out, and tell us what you think in the comment section below.

In this clip following Shane’s rescue, we see the survivors trying to seek shelter with some familiar faces from season 1 — Guillermo and the Vatos. But when Rick and Co. arrive back at the nursing home where Glenn was once held hostage, well… the people they find there are not people at all, setting off a frenzied attack.