Dishonored: Creative Kills Gameplay Trailer – This Is Going To Be Lots Of Fun [VIDEO] 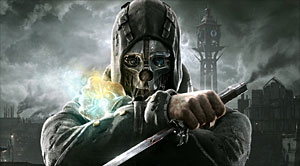 Are you sick, twisted, and imaginative enough to scare the living shit out of most of your friends, who may also claim to be as messed up as you? If so, then it’s your lucky day, because Bethesda Softworks has an upcoming game for you called Dishonored, and most likely you have already heard about it from somewhere.

Even if you’ve already heard of Dishonored, you might not have yet seen the creative kills gameplay trailer, which was released earlier today. And yes, you heard that right! CREATIVE KILLS trailer! That means you will be watching a demo that shows the many different creative combinations you can explore with your magical abilities to kill a foe in Dishonored.

What looks like a blatant blend between Assassin’s Creed and Bioshock, Dishonored is a first-person stealth action video game developed by Arkane Studios that will have voice work done by several famous actors such as Susan Sarandon, Carrie Fisher, Brad Dourif, and Chloë Grace Moretz.

Dishonored is scheduled for release on October 9, 2012, for PlayStation 3, Xbox 360, and Windows.