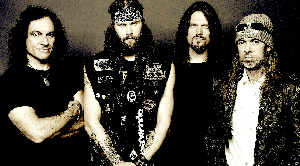 How many post-Pantera bands have we had emerge from the ruins of one of the most important metal acts this world has ever known? And how many do we need? Off the top of my head there was Damage Plan, there is HellYeah, there is Down, and now there’s Kill Devil Hill. Without a doubt, all have had their strengths, but none beyond that concrete foundation known as Pantera.

While we often expect the apple not to fall far from the tree, we can’t expect every apple to be identical (though in an era of GMOs, we’re probably not far off). And if each of the subsequent bands sounded like Pantera, we’d criticize them all for sounding like Pantera. Fucking tell me I’m wrong. I’m not saying we have to like everything that comes from these guys, but the least we can do is appreciate their diversity.

Kill Devil Hill is comprised of drummer Vinny Appice (Black Sabbath, DIO, Heaven & Hell), bassist Rex Brown (Pantera, Down), guitarist Mark Zavon (RATT, W.A.S.P., 40 Cycle Hum), and vocalist Dewey Bragg. The band is currently on tour in support of their debut self-titled album, released by Steamhammer/SPV on May 22, 2012. You can see the tour schedule on the band’s official site: www.killdevilhillmusic.com

Kill Devil Hill just released a video for the track “Strange.” It seems to be a fair representation of the album, given my quick scan of it. “Strange” is, however, a bit more upbeat than the rest of the tracks. It’s not heavy like Pantera, but rather a straight-up hard rock album with traces of Black Sabbath, *Alice in Chains, Down (odd, I know), and more that I’m sure I’m missing.

Check out “Strange” and let us know what you think.