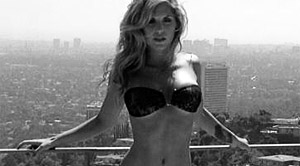 Boys! Boys! Boys! It’s Brittney Palmer, the uber-sexy all-American UFC ring girl who’s promising to be back again with a new and spicy calender. Although Brittney already topped it by being naked this year in the exclusive March issue of Playboy magazine, it still wouldn’t hurt us to see more of her skin in the very near future, even if we won’t get to see all of it this time around. In fact, it would be safe to assume that the Brittney Palmer 2013 calendar could potentially cure ball cancer. The calender is currently in production, and she already hinted that the shot below could be the potential cover shot.

What are you waiting for now? Hit the play button for the video preview above, and go behind the scenes of the Brittney Palmer 2013 calender shoot.