Silent Hill: Revelation 3D – Full Trailer: Does It Reveal Too Much? 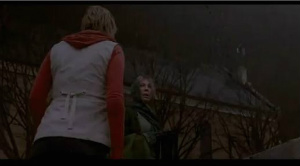 After a long wait, an eternity in hell for some, Silent Hill: Revelation 3D gets its first full trailer. Congratulations! You’ve made it to second base. Still no heavy petting though. However, there’s a lot of heavy breathing, but in this case that is more the result of terror than eroticism. And depending on what you’re into, that may still get your rocks off.

So, as we previously wrote, most of the original cast has returned for a another turn in Silent Hill: Revelation 3D. The full trailer, while exciting and riveting, does what I hate about a lot of trailers: It reveals too much. After watching it, I feel like I’ve seen the whole movie, or at least the best parts. And when that happens, and after viewing the film in theaters, I’m usually pretty disappointed. So, let’s hope that Silent Hill: Revelation 3D at least lives up to the first full trailer, if it can’t surpass it.