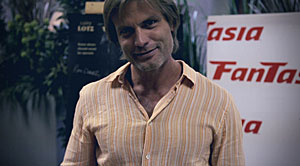 We caught up to the outrageously spectacular Casper Van Dien (aka, Johnny Rico) at Fantasia. When we entered the building, we thought we were being attacked by bugs. All we could hear was Casper screaming. Turns out he was screaming into some fan’s video camera, but in a good way. If there’s one thing Casper isn’t, it’s mean. The dude was totally polite, if you can bear his extreme personality.

Anyway, before Casper got pulled away for an industry dinner, we had the chance to interview him about his recently screened Starship Troopers: Invasion, for which he was the executive producer. If Casper talked up Director Shinji Aramaki any more than he did, you’d suspect him of fabricating a murder alibi. We also gave him the opportunity to plug his upcoming film, The Pact. He plays a cop and says we won’t dislike him; that’s all that he would tell us. Casper did pull the film’s producer, Ross M. Dinerstein, into the interview, and he was even less informative, basically telling us the film is a ghost story. The poster looks terrifying, nonetheless. Enjoy the interview and…