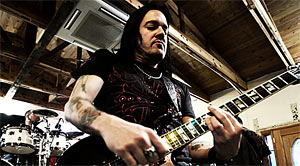 Static-X has just revealed PRONG as a Special Guest for the 2nd leg of the Noise Revolution Summer 2012 Tour. PRONG joins the tour in support of their new record, Carved Into Stone, while Static-X returns for it’s first tour since 2009.

“I’m very excited to have Prong join the tour. Over the years Prong has had a huge influence on many musicians, including myself, and I am honored to share the stage with them.”

Tommy Victor of PRONG adds his sentiment by stating:

“STATIC X has been carrying the torch for no-nonsense, hard hitting music for many years and it’s an honor to tour with them. They’ve put out great records again and again and I’ve witnessed their live show so many times and never been disappointed. It’s going to be fun to see them every night tearing it up with those killer riffs, great beats and raucous hooks! Prong officially thanks Wayne and company for this opportunity!”

Newcomers Davey Suicide and 9 Electric continue throughout the entire Noise Revolution Summer 2012 Tour from the launch on July 15 in El Paso, TX and the tour has dates running until September.