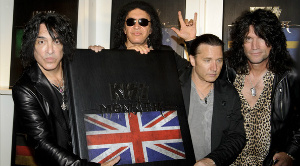 KISS launched the Monster book on July 3rd in the UK (why they didn’t do it on the 4th in the U.S. is a mystery to me – they are, after all, the definition of an all-American rock band).

Anyway, the launching was typical press fanfare, with photo ops and panel interviews being conducted. Most notably, discussions revolved around the inevitable demise of KISS, which Gene reassured would not happen once the Monster tour is finished. It was also revealed that the book is so big that it had to be hand bound, being too big for machines to do it.

Tommy Thayer apparently did most of the design work on the book, which seems a bit shocking since he’s the member with the least amount of history invested in the band. It’s more of a fan’s dream job, than a band member who’s wet behind the ears still. (Personal note: Tommy will never be a band member, so maybe it was a job best suited for him.)