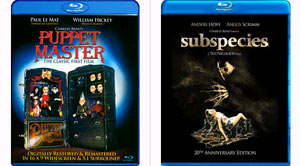 Full Moon Features and Charles Band, two names known for bringing you the best in modern day horror classics, will now bring the best of the Full Moon catalog to Blu-ray with initial releases in time for Halloween.

For over thirty years Charles Band has been creating modern day horror classics such as Puppetmaster, Trancers and Subspecies.

According to Charles Band, Chairman and Founder of Full Moon Features,

“after testing the Blu-ray market with the original Puppetmaster, and Subspecies, Full moon will move forward with additional Blu-ray releases of the best selling titles in the Full Moon catalog. The fan response has been overwhelming in support of Blu-ray and they are demanding more. Featuring wide-screen 16:9 fully remastered picture and sound, these transfers have never looked more beautiful and we’ll re-release the titles on DVD as well.”

On September 18th, 2012, the premiere Full Moon Blu-ray releases will be the first three Puppetmaster films, available individually and as a three disc set. Subsequent releases will include sequels from the Subspecies and Trancers franchises, as well as classic films directed by Stuart Gordon, such as Pit And The Pendulum starring Lance Henkrisen and Castle Freak starring Jeffrey Combs. Other Full Moon classics seeing release on blu ray for the first time include Dollman and Dollman Vs. The Demonic Toys starring Tim Thomerson, Vampire Journals, Doctor Mordrid, Demonic Toys, Head Of The Family and more to be announced later in 2012. They will be available for the low price of only $14.98! Plans are to release two Blu-Ray’s a month with an exact release schedule announced shortly.

Here are the details for the first in the installment: