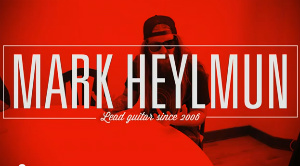 Mark Heylmun is happy to be touring again, since Suicide Silence has had a bit of a hiatus. D-TOX Rockfest in Montebello, Quebec, was one of the band’s first shows this year, and according to Mark it was tight. As mentioned in an earlier article, we missed their set and we encourage the D-TOX organizers to update the travel time estimation on their website for future installments of the festival.

We asked Mark a bunch of questions about Suicide Silence, including projections for an upcoming album, whether or not The Walking Dead is an influence, and who in the band would most likely have sex with a zombie. You’ll have to watch to get the answer.

In case you want to know, Mark is a super chill guy, and so is Mitch Lucker, who could be seen walking about the fest grounds, signing autographs and taking pictures with fans. Mostly, though, he hung around the Iron Fist merch stand and I think we saw him in a bikini once.

Check out the interview with Mark Heylmun and…