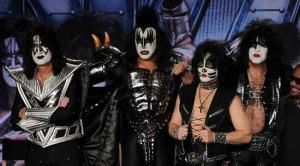 In a recent interview, Gene Simmons teased fans with little chunks of details. These include a slated early July release date for the first single from Monster. No word on title yet. Also, the album will come out in September or October, according to Simmons. If you’re absolutely dying to hear the new material, buy a ticket and see them with Crue; KISS is apparently teasing a couple tracks in their live performances this summer.

In my last KISS Monster post, I mentioned the 10-hour DVD and made some attempt at a smartass comment about the three volumes of the KISSology not being enough, well, this Monster DVD is the fourth installment.

Other than being there to co-write and record, it seems Paul Stanley is helming this one as he did with Sonic Boom. Apparently KISS music is staying alive thanks to Paul. If it weren’t for him, we’d have nothing but the classics we love. Which, in all honesty, I’d be fine with at this point.

Here’s what Gene had to say on the matter:

Paul produced it, because he’s got a clear mind and time to think in those terms. I don’t have the ability and the attention span anymore to do that. We’ve both produced outside the band and both [have] produced Kiss albums before, but this was the right decision. [The material is] all band-written. We sat together in the same room for the first time in decades and came up with some pretty classic stuff. It could be one of our top two or three records ever.

It’s going to be the year of the ‘Monster’ when the album comes out. You’ll hear everybody in the band singing lead. Everybody co-wrote the songs – that includes Eric [Singer], our drummer. It really is a band record. My favorite records are band records where nobody is trying to take over and push their weight around.

There’s also going to be a 10-hour DVD called ‘Monster’ coming out, which is going to be Kissology number four, the fourth one in our series. The first three sold 20-times platinum – they’re monsters. There’s going to be a four-foot book – literally – called Monster. It’s so heavy that it has its own legs, because you physically cannot pick it up. It weighs, get ready for this, 45 pounds.

Destroyer is also getting the reissue treatment this year, complete with remixes, outtakes, a booklet, and more. This should hit shelves this summer.