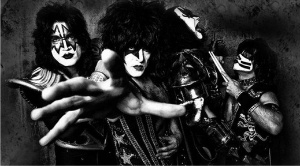 There’s speculation that KISS’ 20th studio album, Monster, will be released this fall, once The Tour with Motley Crue is completed. That would push it back a few months from the originally speculated July release. There are also rumors out there that Monster will contain the Destroyer Deluxe Edition, which would make sense since Monster’s cover art resembles that of the ‘76 classic.

To catch you up on KISS’ Monster news, the cover art has been released, it sounds like the recording process is finished, there should be between 13 and 15 new studio-written tracks, and there’s to be be a four-foot high book and a 10-hour DVD (in case you missed the three-volume KISSology) also called Monster released in June. We all know that KISS are marketing and merchandising experts, but this sounds a lot like a fireworks finale. Could this be it for KISS? Are they going to pack it in after all the hoopla? Well, maybe after one more tour. And let’s just hope that KISS isn’t deliberately naming the upcoming album Monster as a play to get Monster Energy Drink to sponsor the potential tour.

Whether it’s wise to make statements that compare an unreleased work to great former albums, Gene Simmons has gone on record stating that Monster sounds like a combination of Destroyer and Revenge. I don’t know about you, but to my ears those two albums have vastly different sounds, and I’m not sure combining them is necessarily a good thing.

“Technology is a seductive bitch, she will seduce you. You press this button, you don’t have to do anything. But analog is the love of your life. You can push real hard and it always gives back. For the new album, the actual recording process was 24-track tape and an old Trident board. And as many tubes as possible. You need tubes, electricity and thick wood to make that thick sound.”

To leave you off until next time, here’s an older studio message from Paul Stanley and Tommy Thayer during the Monster sessions: