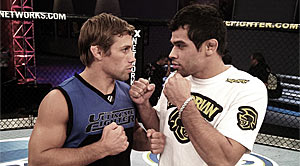 The UFC announced that there will be a new five-round main event at the upcoming sold out UFC 149 event, set to take place at the Scotiabank Saddledome, in Calgary, Alberta, on July 21.

Injury to Brazilian Jose Aldo has forced the postponement of his featherweight title bout vs Erik Koch and Calgary will now see a new main event with the interim UFC® bantamweight title bout between Urijah Faber and Renan Barao now taking place. The Faber-Barao was originally slated for UFC® 148 on July 7th.

Faber, the former WEC featherweight champion who is 3-1 at 135 lbs, faces the owner of the longest unbeaten streak in mixed martial arts in Barao. The Brazilian ‘Baron’ has not lost in 27 straight fights and has stormed his way to the top of the UFC’s 135 lbs division beating – in succession – Cole Escovedo, Brad Pickett and Scott Jorgensen.

Calgary’s card also awaits news of another bout to be announced later as Mauricio “Shogun” Rua’s bout against Thiago Silva was scratched due to an injury to Silva injury, and Rua was subsequently moved to headline the UFC’s August 4th event in Los Angeles vs Brandon Vera.

For more information or current fight news, visit www.ufc.com. All bouts live and subject to change.