Slipknot Releases Another Video Teaser For “Antennas To Hell” – Did You See This Shit? 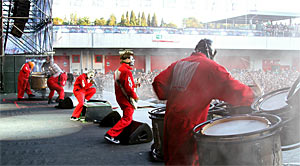 When Slipknot first released a three-minute teaser clip labeled “#0 – Antennas To Hell” on YouTube two weeks ago, it left many of us wondering what the hell is slated for the American heavy metal band on July 24th. No description was bound to the video clip that featured death-breaking live footage in HD and turntable maven Sid Wilson (#0), leaving maggots wondering WTF?

Well metallers, six more clips (all embedded below for your convenience) have surfaced since that release, each one specific to a band member, and the mystery behind all of it has been slightly broken across various websites. New details speculate that Slipknot will be releasing a greatest hits album called, Antennas To Hell, which may include remixes of previously released songs, remasters, and, hopefully, new bonus tracks.

But all of this is just speculation, people, and nothing has been officially confirmed. Oddly, video clip #6 that should feature Shawn “Clown” Crahan is either missing, or skipped for unknown reasons. You can now watch #5 and #7, which just came out yesterday while we await for more teasers.

Stay tuned to Yell! Magazine to find out the truth behind Antennas To Hell. Slipknot will also begin touring again on June 30th, and we plan to catch up with them at Heavy MTL on August 12, 2012.