Another Look At “Django Unchained”: Take The Kids, They’ll Love It! 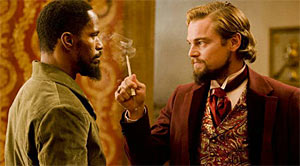 What’s got me excited about this film is the fuss it’s going to cause off-screen as well as on. Why? Rumors abound that the film portrays some of worst factually recorded tortures inflicted upon slaves by slave owners in the pre-Civil War American South, and then Django, played by Jamie Foxx violently punishing them for it. Normally I’d say “Nah, that’ll have been written out by the director,” but this is a Tarantino film – and with him, anything goes. They did some pretty twisted stuff to Nazis in Inglorious Basterds, lets see how high the level goes in Django Unchained.

Slave owners’ blood spattering on a field of fluffy cotton in the trailer? Foxx’ line, “Kill white folk and get paid to do it? Whats not to like?” This one’s not going to cause any kind of controversy at all…