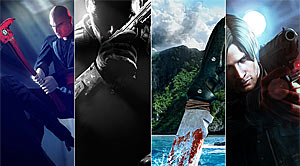 Welcome to Yell! Magazine’s second entry (see our E3 2012 Day 1 preview) in our week-long look at the most anticipated games being unveiled soon at an E3 near you. Today’s compilation includes our yearly injection of Call Of Duty’s frenetic brand of shooter action, a game which we recently previewed on our Resident Evil retrospective, the latest iteration of open-world first-person shooting from the Far Cry franchise and the long awaited return of a certain bar-coded assassin extraordinaire.

With such fierce competition for the attention of gamers around the world, it’s too early to tell which game will walk away with all the accolades from press and convention goers alike. Call Of Duty is certain to make waves based on sales numbers alone, but as millions of COD haters worldwide will likely point out: sales figures don’t make for quality games. Just look at the glut of crappy hunting games choking store shelves. One thing’s for sure, it’s going to be a hell of a year for the industry!

It’s been a stunning six years since the last entry in the Hitman franchise, Blood Money, was released in 2006. In the interim, the general public was introduced to the bald assassin via a 2007 theatrical Hitman release that, like many video game adaptations before it, failed to ignite the box office. Blood Money ended with the titular anti-hero faking his own death, with help from long-running handler Diana. Judging from the above trailer, premiered at E3 2011, Diana’s motives might not have been as selfless as players were led to believe.

Hitman is a series that could richly benefit from improved, more modern mechanics, as the stealthy gameplay of the prior entries had grown rather thin around the time of Blood Money. Still, with an appealing lead and an all-star cast featuring Powers Boothe, Keith Carradine, Shannyn Sossamon, and more, Absolution might just be the shot in the arm, or the high-powered, silenced sniper round to the head, the series needs.

Just like the elephant in the room, a Call Of Duty game gets to sit wherever it pleases. Release it at any point in the year and you’re guaranteed a gigantic hit, with opening week numbers that dwarf even the biggest of Hollywood so-called blockbusters. Developer Treyarch ventures away from the beaten path with this entry, with a story that spans the ’70s, ’80s, and culminates in the near future of 2025. This will mark the first time the developer has released a Call Of Duty game with modern day components, having previously set foot in WW2, both the European and Pacific theaters and Cold War era Vietnam.

Although a full voice cast has yet to be revealed, protagonist Alex Mason returns for the first portions of the game, which would of course require Avatar actor Sam Worthington to reprise his role. His mysterious friend-foe Viktor Reznov also returns, thus Gary Oldman will no doubt grave the project with his voice once again. As with any Call Of Duty game, production values are sky high. With every new COD game released a new chorus of detractors make their voices heard. Is this the year when Call Of Duty finally releases a lackluster installment? Or will the cash cow continue to pump out the greenbacks?

If you’ve noticed a trend in these updates it’s that games first previewed in E3’s past are resurging at E3 2012. This is the case with Far Cry 3, which Ubisoft Montreal first demoed in 2011. Taking the franchise back to its roots, Far Cry 3 showcases a tropical island setting rather than the African outback of the second installment. What hasn’t changed is the series’ penchant for wide-open worlds, gorgeous environmental effects and battles that affect and change the land around them.

The embedded trailer above shows off that graphics engine, which, let’s face it, has always been one of the main reasons for checking out every new iteration of the Far Cry saga. Realistic water physics, flowing grass and thrilling combat abounds. Early previews showed a leveling system based on experience points, but the game has apparently undergone some changes since then. Ubisoft Montreal, also the stewards of the Assassin’s Creed franchise, seems poised for a very profitable year.

Yell! Magazine recently chronicled the Resident Evil franchise’s evolution from pure survival horror to full-on third-person shooter in our RE retrospective. While we’re somewhat dismayed that a franchise that cut its teeth on haunted house scares is now just one more shooter on the block, what we’ve seen of RE6 does look like a much darker tale than Resident Evil 5’s African safari with zombies. Franchise headliners Leon Kennedy and Chris Redfield teaming up, possibly after butting heads? Albert Wesker’s son being introduced? Zombie shenanigans in densely populated areas? Sherry Birkin!!!! Oh wait, Sherry Birkin… she was annoying.

I’m curious to see where the series goes after this installment. The developers already stretched the main story past its breaking point in RE5, how much life does the franchise have left in it now that all or most of its major antagonists have been defeated? Also, will Leon ever get a haircut?

Tune in to our coverage of E3 2012 for all the latest news and developments!