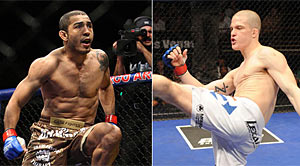 The Ultimate Fighting Championship, the world’s premier mixed martial arts organization, announced today that tickets for its inaugural event in Calgary will go on sale to the general public on Saturday, May 12. UFC 149: ALDO VS. KOCH sees featherweight champion Jose Aldo defend his145-pound crown against tenacious contender Erik Koch on Saturday, July 21 at Scotiabank Saddledome. Both fighters will join local UFC middleweight Nick Ring and UFC Director of Canadian Operations Tom Wright for a press conference and other events in Calgary on Wednesday, May 9 at 10 a.m. MTN at Shaw Court.

The July 21 event marks the first of three UFC events taking place in Canada in 2012 as Toronto (Sept. 22, location to be determined) and Montreal (Nov. 17, Bell Centre) are also set with UFC dates this calendar year.

Reigning UFC featherweight champion Jose Aldo (21-1, fighting out of Rio de Janeiro, Brazil) is undefeated in the UFC as he puts his belt on the line against knockout artist Erik Koch (13-1, fighting out of Milwaukee, Wisc.). Considered one of the best pound-for-pound fighters on the planet, Aldo has reeled off 14 straight wins and has not lost since 2005. For his part, the 22-year-old Koch has but one career loss and has won four straight with two Knockout of the Night awards in those performances.

UFC Fight Club members will have the opportunity to purchase tickets to this event on Thursday, May 10 at 10 a.m. MTN via the website ufcfightclub.com. A special Internet ticket pre-sale will be available to UFC newsletter subscribers on Friday, May 11,starting at 10 a.m. MTN. To access this presale, users must register for the UFC newsletter through UFC.com.