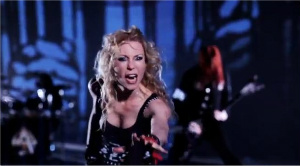 Arch Enemy have released a new track/video from their Khaos Legions album.

“Under Black Flags We March” is one of our favorite tracks off the latest album, and we had a chance to sing our praises of it to Michael Amott and Sharlee D’Angelo when we interviewed them last year. The track has a killer bass line, it’s dirty, tough, and gets you in the groin.

Sure, it’s another video of a band playing, but unlike the usual fair, there’s a purpose here: It’s Nick Cordle cinematic debut with the band since the departure of Chris Amott. Besides, Arch Enemy is aesthetically pleasing to see.