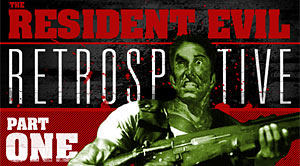 Or: Introducing Young People To The Green Herb Since 1996!

Few video games can claim to be true multimedia juggernauts. Popular franchises spawn sequel after sequel but remain firmly a part of the video game realm. The occasional Final Fantasy title might branch out into movies, cartoons, and a variety of other tchotchkes seemingly designed with the express purpose of milking that FF7 cash cow till the teat runs dry.

Resident Evil, however, is a true industry success story. The series has released popular title after title, countless spin-offs of varying quality, spawned animated features, an inexplicably popular movie series on the verge of unleashing its fifth entry in September, etc! I’m reminded of that scene in Spaceballs in which, to paraphrase Mel Brook’s Yogurt, the world gets to enjoy the thrills of “Resident Evil the lunchbox, Resident Evil the coloring book, Resident Evil the flamethrower” and my personal favorite, because I actually own one, Resident Evil the Airsoft replica Beretta 92FS Samurai Edge.

Bow to my superior nerdiness, ye mighty, and despair!

Since gaming websites are currently inundated with content from the upcoming Resident Evil 6 and because our recent review of Operation: Raccoon City has left your faithful reviewer hungering for quality survival horror chills, Yell! Magazine is extremely proud to present…

Well, that’s not right at all. Proud is too strong a word. We here at Yell! are a dour bunch, incapable of expressing feelings that go beyond the mildly content. Personally, I blame the tragic 2008 group hug incident that left 12 interns dead. We made the mistake of introducing the innovative concept of hugging to our affection-deprived interns. They started embracing each other with the ferocity of senior citizens grasping at their favorite slot machines and it all went downhill from there. At night, if you’re very quiet, you can still hear the sounds of spines breaking… it’s like somebody stepping on a bag of chips…