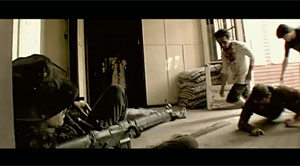 Eagle One Media and iFN today have released several preview pages of the ZOMBIE DAWN: Safehouse comic book that will be given away to ticket buyers attending the theatrical showings of the action horror ZOMBIE DAWN motion picture which opens April 20th.

The complimentary 28 page comic book was specifically commissioned for the film and created by comic industry veterans David A. Rodriguez and Dheeraj Verma and will be bilingual in English and Spanish. In a special arrangement with theaters, cinema ticket buyers attending the Spanish language horror film shall receive a free limited edition copy of the ZOMBIE DAWN: Safehouse comic book that contains a prequel tie-in story to the feature film.

ZOMBIE DAWN recently won awards at the Zixion Sars film festival in Chile for directors Cristian Toledo and Lucio A. Rojas, and art direction. The film has won praise for its presentation and kudos for the film makers in assembling such a feature while working with only a micro budget. Along with ZOMBIE DAWN, the award winning computer animated horror short ‘Hambuster’ from Paul Alexandre will be played before the main feature.

Film premise: In 2006 a mysterious incident at a remote mining facility unleashes a zombie horde with an appetite for human flesh. It decimates large portions of the cities and countryside. The only course of action is to rapidly enclose the infected areas and seal them off from the rest of the remaining, living population. Now, 15 years later the tattered remains of the government and the mining corporation responsible where the initial event took place commit themselves to finding out what may have happened at the mining complex. The solution is to covertly send in a group of mercenaries led by a cynical but no-nonsense Colonel and investigative scientists into the quarantined zone to find answers.

“THE PASSION FOR THE GENRE IS HERE, DOWN TO THE TRIGGER HAPPY ‘GOOD GUYS’…THERE’S A CULTISH CHARM TO EVERYTHING” John Lichman, INDIEWIRE.COM

Fans of ZOMBIE DAWN can find theater locations and dates at the official website or facebook page.