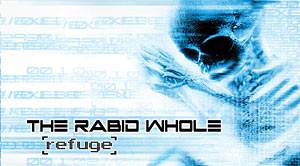 With their CD release date just around the corner on May 1st, electro alt rockers THE RABID WHOLE are not only gearing up to unleash their latest full-length creation, Refuge, on the masses at their CD launch on APRIL 27TH at TORONTO’S BOVINE SEX CLUB, but are also packing their bags for a tour quickie that will see them play La Belle Province in both MONTREAL and SHERBROOKE on MAY 25 and 26.

“We have settled more into our own sound and the themes of the album are easy to relate to, the energy is up, the drumming is more intense, the guitars are louder, soft parts are softer and the electronics are much more noticeable.”

SAYS VOCALIST / GUITARIST ANDREAS WEISS of what listeners should expect to hear on both Refuge and during the band’s live shows.