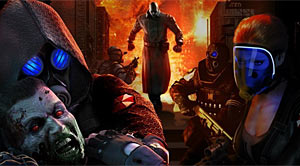 Raccoon City isn’t vastly different from most cover mechanic-based shooters crowding the market. There’s an attempt to make this a team effort, but your AI-controlled squad is dumber than a blonde building a fire underwater. Stepping into your line of fire, categorically refusing not to engage boss creatures in melee, and generally behaving like the slow kids at the Umbrella Academy For Special Needs Special Ops Guys, you’ll have to do most of the heavy lifting yourself.

Umbrella. The few. The proud. The dumbasses.

Since the game rarely pauses for breath in between action sequences, there’s a cover mechanic in place to allow the player to gather his thoughts or plan his next move, but you’re out of luck if you’re expecting something fancy along the lines of a Gears Of War-style mechanic. While Gears may have written a thesis on cover systems, Raccoon City only bothered to skim the cliff notes. The game uses a “sticky” cover mechanic, meaning that your character will automatically stick to a flat surface no matter what your intentions are. Want to pick up some ammo or a health-replenishing green herb just sitting in a corner? Odds are you’ll stick to the closest wall of the room several times before managing to pick it up.

Enemies are bullet sponges, soaking up tremendous amounts of damage. Even average grunt-type zombies take loads of automatic fire before dropping. Ammo is abundant but that just serves to undermine whatever tension the game might have been going for. Boss fights, a Resident Evil hallmark, are dumbed down considerably. Raccoon City isn’t a very fun game. It’s repetitive, unpolished and even if there’s an inkling of a better game lurking beneath its flaws, it still wouldn’t have been anything to write home about.

While nowhere near the level of graphical prowess of one of the main entries in the franchise, Raccoon City still manages to hold its own. Levels are appropriately dripping with horror atmosphere, even if the game itself fails to capitalize on it. The few cutscenes presented are better overall in selling the tone the game strives for than the actual gameplay. The lowered level of visual intensity means that, at least, your console should run Raccoon City just fine without any stuttering or graphical abnormalities.

Sound effects are straight out of the survival horror vault with zombie moans, gunfire, rainfall, and other snippets of audio you’d expect to find in this type of game. Voice acting, as previously stated, is more painful than nails on a chalkboard. The Resident Evil franchise as long been the butt of industry jokes when it comes to its voices, starting all the way back with the first game and the legendary howler concerning Jill being the “master of unlocking.” Overall, Raccoon City looks adequate and sounds adequate. Not a sterling recommendation, but you could certainly do worse than this.

Resident Evil: Raccoon City feels like a budget entry in a 5-star franchise. The entire product feels rushed and incomplete, as if several designs teams created the game’s mechanics by throwing ideas against the wall to see what stuck. This is fine for pasta, not so much for game development. Luckily, Resident Evil 6 is right around the corner to wash the taste of this unfulfilling title out of your mouth.