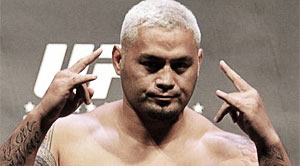 What a long, strange, and most importantly, beautiful trip it’s been, fans and friends. I’m sure by now you’ve heard of the movement to give Mark Hunt a shot at the UFC Heavyweight Championship if Alistair Overeem is pulled out of his upcoming title fight with Junior dos Santos, which is still currently scheduled for UFC 146 in May. It’s taken some convincing and some debate, but in the end I can now say that I’ve placed myself in Mark Hunt’s camp. So, here’s my attempt to throw my own hat (or hand, or however the hell that quote goes) into the debate: here’s why I think you should Rally For Mark Hunt.

To badly paraphrase an epic movie, and to prove once again just how big of a nerd I am, allow me to say this. When it comes to Mark Hunt… of all the stories I have read and discussed in my time as an MMA fan, Mark Hunt has been one of the most human.

What I mean by that is simple: Mark Hunt is not a fairy tale or an idol. So many of today’s top athletes are so good that they’ve reached near-mythic proportions. And there’s nothing wrong with that! In fact it’s awesome that there are so many amazing fighters out there nowadays.

But, and this is a point I’ve raised on more than one occasion… can you really relate to those fighters?

To get even nerdier, let’s make a comparison to comic books. We have Superman, who’s had such a long track record because he’s so powerful and represents everything that is good about humanity. Certainly in MMA today there are fighters so good that sometimes you have no choice but to stand in awe of them.

Then you have Spider-Man, or in MMA’s case, Mark Hunt.

You have someone you can actually relate to, someone who’s no stranger to defeat, someone who’s been ridiculed and mocked and most would say reduced to nothing more but a joke, a “has been” or even a “coulda been” since Hunt showed so much promise at the start of his career.

And look where we’re at now.

It is very, very, very simple to understand why so many people are making Twitter posts, Facebook posts, and just posts on the internet in general in support of Mark Hunt.

It’s because we empathize with Mark Hunt, and I truly believe that there is no stronger motivating factor for sports fans than when we can actually empathize with the people we spend so much of our day looking up to and staring in wonder at.

So, yes, it’s been a long and strange trip we’ve been on in the case of Mark Hunt. I don’t know if Hunt himself wishes things could have turned out differently, but at least Hunt can take solace in the fact that his epic losing streak would one day be put into context as the first chapter in what has been perhaps the greatest comeback in MMA history.

So, yes, I do want Mark Hunt to replace Alistair Overeem if Junior dos Santos gets injured. I know the arguments against it: the kindest say he’s at least one/two fights away from legitimately deserving a title shot, the harshest say “once a joke, always a joke” and claim that Hunt will diminish the value of the belt even if he loses.

To them I say: the heart wants what it wants. And Hunt’s fans are united in their desire to see if Hunt has it in him to complete this long journey and live happily ever after.

And can you really blame us for wanting that? I don’t think you should.

Now, I won’t pretend like this one little article amongst what must be hundreds of articles by now will end the debate. That’s not my intention. My intention has been to do what I always do: to give my opinion and see if anyone’s crazy enough to read it.

So that’s that, fans and friends. I’m joining the cause, and putting both of my feet firmly in the bandwagon. Let’s really for Mark Hunt.