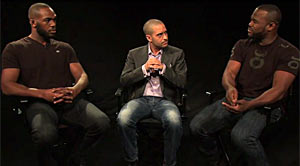 Former training partners Jon “Bones” Jones and Rashad Evans engage in a war of words before their war in the Octagon at UFC 145 in Part 1 of Counterpunch. UFC Ultimate Insider host Jon Anik moderates a gentlemanly debate that quickly escalates into heated verbal combat.