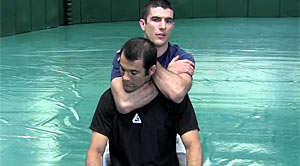 Although it’s quickly grown into one of the largest Mixed Martial Arts channels on YouTube, I admit I’m a newcomer when it comes to “The Gracie Breakdown”. As a dreaded (hint: I’m mocking myself and my fellow warriors) “keyboard warrior” of course I’m interested in all the flashy, beautiful techniques that Mixed Martial Artists know and demonstrate, but The Gracie Breakdown has always been one of those “I’ll get to it eventually” things. At least for me. But recently, I felt compelled to watch one that demonstrated how a recent tragedy could have been prevented. Because I feel that this video is as close to a Public Service Announcement as we’re going to get in MMA, I’d like to show it to you in case you haven’t seen it yet and maybe even discuss it a little.

But first, a little backstory. Recently, World Wrestling Entertainment presented another one of its “WrestleMania” events. As a former super-hardcore pro wrestling fan, I’ve got nothing negative to say about pro wrestling or pro wrestlers. But as seen in this report, a young man’s life was tragically cut short when he pretend-wrestled with his younger cousin at a family gathering to watch the WrestleMania event.

This story, which swept and shocked the internet about a week ago, detailed how the younger cousin (who was fourteen) accidentally killed the older man (who was twenty-four) after placing the man in a Rear Naked Choke and not letting go of the hold.

And so, in this week’s Gracie Breakdown, Ryron and Rener Gracie break down the Rear Naked Choke, one of the most-famous and most-effective choke holds in all of martial arts. The video can be seen here.

In the video, not only is it discussed why the choke works in specific detail, the brothers also discuss several ways to prevent death or serious injury as a result of a choke. And perhaps most useful, the brothers also discuss and show several ways to detect if an opponent has been rendered unconscious as a result of the hold.

Around the internet, I’ve seen a few fans that claim that this tragedy was just “natural selection” working for us. I find that view not only incredibly pessimistic, but incredibly cold-hearted and callous. I commend both Ryron and Rener Gracie for not taking this “stupid people will be stupid” approach and instead trying to educate the masses on what many consider a beautiful, incredibly useful technique.

As a fan of the “art” side of Mixed Martial Arts, I love a good Rear Naked Choke. The physics of the hold (for lack of a better term) fascinates me. The way that Brazilian Jiu-Jitsu as a whole was designed for a weaker opponent to not only beat but maybe even dominate a stronger opponent also fascinates me, which is probably why BJJ is so entertaining to me, especially in MMA, despite the fact that wrestling has emerged as MMA’s most-dominant base.

And I won’t lie: the Rear Naked Choke looks cool as hell and I’ve always wondered what it would be like to put someone in it. I, personally, am smart enough to not try this on anyone without getting the proper training for it, though, no matter how many times I’ve seen people do it. The voice in my head screaming “you’re too stupid to do this” screams so loud that I’ll probably never try to choke someone out without training unless my life was in danger.

But I will not condemn people or just shrug my shoulders and say “natural selection” when tragedies like this occur. Instead, I will try in however small a way to do what Ryron and Rener are doing: to teach, to get the word out, to do my part in trying to prevent something like this from ever happening again.

So, please, watch the video. Even if you think you know all there is to know… just take seventeen minutes out of your day. Please. And thank you.