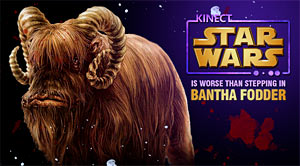 [Editor’s note: This is an atypical Yell! Magazine post. Big Pirate Jim is a new contributor and we haven’t locked him in our writer’s cell yet.]

Lots of fans say the prequels “ruined Star Wars.” This is far from true. They weren’t the best sci-fi action films ever made, but they were far from the childhood-memory-destroying atrocities a lot of die-hard Star Wars fans argue that they were.

Now, on April 3, 2012, Microsoft released Kinect Star Wars – the Kinect-controlled game based on the franchise. This is a big launch, there’s even been a reskinned Xbox 360 with an R2-D2 paint job and a chrome C-3P0 colored controller released with the game. It was originally set for an Xmas release, but developing delays caused it to be put back until Easter. If there’s one thing that’s certain, Kinect Star Wars should never rise again. With the custom console launch, one was encouraged to expect good things. However, it seems that with this next-gen control system the easiest thing to do was include dance levels with Han Solo dancing to a bad R&B song about himself.

This gameplay excerpt uploaded from Kinect Star Wars will have some of the purists wishing The Phantom Menace was as bad as Star Wars ever got. I feel we’ve reached a new low. (Skip to about 0:30.) As if the Han Solo song weren’t reason enough for Microsoft to shove their heads back up their asses, there are other videos out there with Boba Fett doing a routine to a remixed version of “YMCA.” It’s so awful that it makes me question: “Could the moves he pulls (Wookie Hug, The Speeder, or the flamboyant Trash Compactor) along with some choice words of encouragement (Awesome and OK) from the system flashing across the characters’ crotch be subtle digs from frustrated developers? At one point R2-D2 starts dancing. Admittedly, R2-D2 is arguably the best character to ever dribble out of Lucas’ pen, but he’s more suited for a game of kick the can than dancing. It’s no wonder one game developer went on record Tweeting, “About 100 studios worked on that piece of s***. MS had no idea what they were doing. Devs wanted their name taken off it.” From the horse’s mouth, the people employed to work on the game wanted no recognition for their work. Given that a lot of Kinect games are dancing games, it appears that the developers were told to put together easy-to-build basic dancing mini games as part of the package, rather than try to do something interesting and inventive with the ground-breaking technology available to them. The Kinect masterpiece will arrive someday, but Kinect Star Wars is no work of art.
httpv://www.youtube.com/watch?v=yvOF_SYZpHo&w=560&h=315