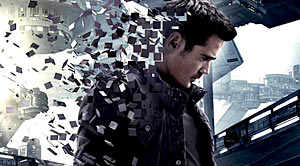 As promised by Sony Pictures who teased us a few days ago with a teaser for the official Total Recall trailer. So it’s now Sunday, and the visually mind-blowing trailer is here. I personally can’t say I like, or dislike it. The remake feels completely fresh, but with all the memorable moments of the original.

Watch it for yourself, and you be the judge on the Total Recall remake by leaving your thoughts in the comments section below.

Total Recall will be released in North America on August 3, 2012.

Euroamerica (formerly the United States and the European Union) and New Shanghai (formerly China and South East Asia) fight for political power in the far dystopian future. A simple factory worker suffering from violent nightmares (Farrell) begins to suspect that he’s a spy whose memory and personality were erased and replaced — though he is unaware which side of the fight he’s on and how important his lost memories will be in its outcome. What matters to him the most is that he must team up with a young female freedom fighter (Biel) in order for both of them to change the political system in their own country, Euroamerica, which is currently controlled by Euroamerican President Vilos Cohaagen (Cranston) and his government that rules with extreme austerity.