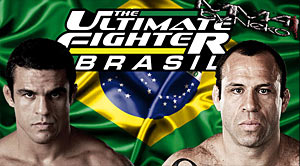 For American and Canadian audiences: All 13 episodes of the first international edition of TUF will air on TUF.tv Sunday night at midnight ET / 9:00 p.m. PT

Seven years after its debut in the United States, in 2005, the first international edition of the famed reality TV show The Ultimate Fighter begins in Brazil. Co-produced by Brazilian production company Floresta, the inaugural Brazilian version of the show is the first time a TUF series was filmed outside of the United States.

The Ultimate Fighter – Brasil features UFC legends Wanderlei Silva and Vitor Belfort as the coaches of the first season, which features both the featherweight (145 lbs) and middleweight (185 lbs) divisions. As is standard on this series, the coaches will face-off in a highly anticipated live rematch in June for the grand finale.

The Premiere episode will showcase elimination bouts, narrowing down the initial group of 32 fighters to the final 16 who will move into the TUF house. From there, theywill be split between “Team Vitor” and “Team Wanderlei” and face weekly eliminations until the finale, where a winner from both weight classes will be declared The Ultimate Fighter®and win an international UFC contract.

The initial 32 contestants, in both the featherweight and middleweight divisions, hail from 15 of the 26 states inBrazil and represent a diverse cross-section of the country including São Paulo (8), Paraná (4), Rio de Janeiro (3), Amapá (2), Santa Catarina (2), Ceará (2), Brasília (2), Rio Grande do Norte (2). Also, the states of Minas Gerais, Roraima, Bahia, Mato Grosso do Sul, Espírito Santo, Amazonas and Paraíba have one representative each.

Althoughmany of the details will be kept under wraps until the Premiere, it has been revealed that a few famous personalities visited the house and training center during the taping. There are special appearances by UFC Middleweight Champion Anderson Silva, UFC Heavyweight Champion Junior Dos Santos, UFC Featherweight Champion Jose Aldo, former UFC Light Heavyweight Champions Lyoto Machida and Mauricio “Shogun” Rua.

The series is one of the mostsuccessful sports reality shows in the US, having discovered some of the most talented fighters in the UFC. It has also helped leverage the promotion’s popularity amongst American audiences. The first edition, which had UFC legends Chuck Liddell and Randy Couture as coaches, featured big names such as Diego Sanchez (middleweight winner of that season), Forrest Griffin (light heavyweight winner), Josh Koscheck, Stephan Bonnar and Kenny Florian.

A part last season’s featherweight winner, Diego Brandão, the first Brazilian to ever win the show, other Brazilian fighters have appeared on previous editions. Heavyweight icons Rodrigo “Minotauro” and Dos Santos have been coaches. Minotauro appeared on the eighth edition, which aired in 2008, against former UFC Heavyweight Champion FrankMir. Both winners from that season, light heavyweight Ryan Bader and lightweight Efrain Escudero, were members of “Team Nogueira”. Brazilian fighter Vinicius “Pezão” Magalhães was one of the finalists from that edition, but lost the title to Bader. Dos Santos competed against former champion Brock Lesnar on the 13th season. The Brazilian TUF pioneer was Jorge Gurgel, eliminated on the eighth episode of the second season.