The Walking Dead 2.13: Beside the Dying Fire 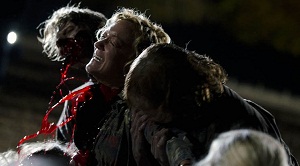 As the season finale, “Beside the Dying Fire” strikes me as a better representation of what new show runner Glen Mazzara has in store for us. I suspect that, in the long run, genre fans will prefer this version of The Walking Dead. For one, it follows the source comic book series more faithfully. We even got a glimpse of that character the World Wide Web won’t shut up about. You know the one: she travels with a samurai sword and two armless walkers (walkers can get a bit grabby around happy hour). It’s clever how the producers hide her face so as not to limit their casting options next year. It makes her introduction in the woods all the more badass.

A lot more care has gone into pacing as well, the season’s abysmally sluggish start notwithstanding. Since the hiatus, every episode has featured an introduction, climax, and denouement of its own, all the while advancing the main plot. Take, for example, this week’s dramatic zombie attack, which sets the tone for the rest of “Beside the Dying Fire” but also concludes the static saga of Hershel’s farm. I thought for sure the old man would bite the dust. Instead, Jimmy and Patricia get eaten alive. I’m sure I’d have cared if they’d been developed as actual characters.

The religious subtext introduced in “What Lies Ahead” also gets some degree of closure as Hershel compares the walker plague to the Second Coming, insinuating God’s plan was to abandon man all along. Also, Rick seems to have lost part of his soul, or maybe just his patience for nincompoop whiners questioning his every move. Incidentally, did anyone else notice that all the dissenters by the campfire are women? Okay, Glenn voices his concerns as well, but girls, Asians: what’s the difference? Neither can drive worth a damn! I’m kidding. I’m kidding.

Actually, I find the regressive gender dynamics in The Walking Dead are starting to taint even the best character moments, such as Glenn calming Maggie down in the bloody product-placement vehicle. His asking to take the driver’s seat and then proceeding not to drive but to console her should have served as a perfect symbol of his burgeoning leadership, but, in light of Daryl constantly taking care of Carol and Lori relying on Rick to tie her shoes, one has to wonder whether the writers think the fairer sex was naturally built to follow man’s lead.

It’s too bad because, to some extent, the women of The Walking Dead are finally coming into their own. Carol, for example, is more vocal this week than in all her previous appearances combined. I also dig Andrea running alone into the woods, shooting dimwitted walkers left and right. The scene plays like a tribute to one of my favorite bits in the 1990 Night of the Living Dead remake, when Barbara (Patricia Tallman) decides to take her chances outside: “They’re so slow. We could just walk right past them, and we wouldn’t even have to run!”

In the spirit of referencing unnecessary movie revivals, Rick’s confession about his true motives when killing his best friend reminds me of a similar scene in Star Wars Episode II, wherein Anakin tells Padmé he slaughtered an entire village of sand people. The difference lies in Mrs. Grimes not cradling the guy as if murder turned her on. Given her epiphany after Dale’s passing, I suspect the fickle woman is partly reacting out of guilt for riling up her husband in “Triggerfinger.” She probably expected him to rise above her pettiness as usual. In a way, Rick has become the leader Shane always wanted him to be, but there’s a reason Lori chose one lawman over the other.

Death toll so far: 12. Things I miss about the first season: just one. Darabont’s take on The Walking Dead using its apocalyptic setting to celebrate the human spirit. Sure, the writer-director tended to gloss over essential plot mechanics to get these beats, but I haven’t felt a lump in my throat or an intrusive tear down my cheek since Mazarra took over last fall. His characters feel more like complex action heroes than legitimate human beings. Here’s hoping Season 3 strikes the perfect balance between plot integrity and heartfelt humanity.