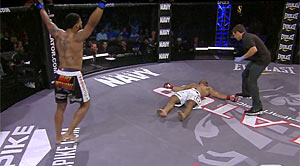 In the first quarterfinal fight of the Bellator Season Six Middleweight Tournament, excitement was in the air as Bellator veterans Vitor Vianna and Brian Rogers were expected to bring fireworks when they squared off.

The fight started with both men exchanging on the feet, however, Vianna soon made it known his intentions of bringing the fight to the ground. Rogers, showing excellent takedown defense, preferred to keep the fight standing where he was at a distinct advantage. Rogers rocked Vianna with a right cross and followed up with a highlight-reel flying knee that sent the Brazilian Vianna to the canvas.

Referee Jason Herzog stepped in to stop the fight at 4:14 of the first round and give Brian Rogers the knockout victory.