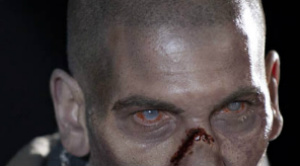 In the end, Shane got to prove Dale wrong. He, in fact, does not “belong to this world,” though it’s worth noting the deputy was not the victim of justifiable homicide. He committed suicide. Even the man wielding the blade says so (“He’s not a bad guy; he’s just his own worst enemy”; “This is you, not me!”), and who would know Shane better than his best bud and life-long partner, Rick? It occurs to me that this is the first time I care about a major cast member biting the dust. The character had, in fact, become my favorite, generating most of the yummy drama on The Walking Dead, and I contend he was smarter than any of his fellow survivors will ever know.

Mind you, we may never understand what pushed the hothead deputy to such drastic (and elaborate) measures in “Better Angels,” though a smart gambler would surely put money on his last conversation with Lori. Her speech strikes me as untypically kind but also firm about their affair being over. Before, the accidental adulteress had always denied she’d had feelings for anyone but her husband, a blatant lie that made it too easy to think the truth was more than it was. Confronted with reality at last, Shane might, for the first time, have considered his future instead of the tribe’s immediate needs: playing the petulant uncle to his own son or daughter, watching Rick put his child second to outdated ideals, feeling powerless as his friend fails to protect a family he’s come to think of as his own… However, there’s more to it than that. Shane always figured his place in the world was at Rick’s side, zombie apocalypse or no. Even when he thought the latter had died, the former sheriff’s deputy positioned himself in his shadow, taking care of the loved ones he’d left behind. As such, it must have devastated the man to see his best friend nominate Daryl as the tribe’s new second in command, even though the plot point goes a long way to explain why the show runners picked him to serve as Dale’s executioner last week.

All right, so that settles the question of why Shane might have wanted to die, but why didn’t the guy just shoot himself in the noggin and call it a day? Unfinished business is my guess. For one, the tribe’s decided to spare Randall’s life, which puts the lives of Carl, Lori, and everyone else he holds dear (that mostly means Rick) at risk. It, therefore, comes as little surprise that phase one of his plan would involve getting rid of the slime-ball once and for all. Of course, one could ague that’s like a doctor treating the symptoms instead of the disease.

For Deputy Walsh, the real problem lies in the tribe’s leader refusing to adapt his moral code to the harsh new world before them. As the opening eulogy hints, Dale’s sudden demise has only made matters worse. With all that guilt clouding his judgment, how is Rick expected to make the hard choices necessary for folk like Glenn and Andrea to bond by a dead man’s van (lovely scene by the way)? The survivors need a leader, not a nice guy, and Shane is going to make sure they get one if it’s literally the last thing he does. Consider the way he taunts his estranged partner rather than gun him down, pushing the same buttons that started their silly squabble in “18 Miles Out.” Shane doesn’t want to take Rick’s place as leader of the tribe. He wants Rick to take over for him as lethal decision-maker. The best way to achieve this is to get his friend to kill him, forcing the conflicted man to cross that ethical line at last and realize survival lies on the other side.

Through death, both Dale and Shane got what they wanted. However, I suspect the effects will cancel each other out, proving temporary for all except Carl, who can suddenly hit a bull’s-eye without recoil (presumably, the writers never shot a gun). The boy doesn’t believe in the afterlife, but I can’t help imagining the two souls debating their influence in the ether, not realizing that Rick remains, as always, his own man. Neither Dale nor Shane belonged to the ghoul-infested world of The Walking Dead, but he does.

Death toll so far: nine. On a related note, I’ve heard a lot of conjecture about the walker virus spreading to the living or lying dormant in survivors. I still believe the writers are following George Romero rules. According to that lore, when you die, you turn into a zombie: no infection, no medical reasons, just sheer terror.