King Mo’s Future In Doubt, Will The Former Champion Ever Return To The Cage? 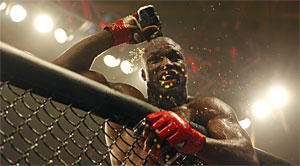 Muhammed Lawal, a former Strikeforce Light Heavyweight Champion known to fans worldwide as “King Mo”, is no stranger to adversity. Usually that adversity comes in the form of the best Light Heavyweight competition Strikeforce has to offer and/or the controversies he inevitably finds himself in due to his brash, outspoken personality. But according to a recent report, Lawal is facing a far more serious battle: the battle to save his career. Here are all the details.

According to MixedMartialArts.com, Lawal is suffering from a major bout of staph infection after undergoing ACL surgery that nearly cost him his leg. According to the report, Lawal’s staph infection has returned worse than ever before, and the former champion has undergone six surgeries in just one month and is now connected to a tube that gives him antibiotics 24 hours a day.

Currently, Lawal is 8-1 with 1 No Contest as a professional Mixed Martial Artist. In his most-recent bout, Lawal scored a dominant KO win over rising star Lorenz Larkin. The win was recently overturned and ruled a No Contest when it was revealed that Lawal had tested positive for a banned substance after the fight. Before that, Lawal was coming off a major KO victory over Roger Gracie. I’ll be honest: I wasn’t always a fan of King Mo. I never really bothered to follow him when he was making waves on the Japanese circuit. When he came to Strikeforce, though, I started paying attention. And it’s hard not to pay attention to King Mo: he’s never afraid to give a controversial interview, he’s known for his extravagant ring entrances, and he’s got a large majority of his pro MMA wins (six of eight) by (T)KO.

Once you wash away all the controversy, I think King Mo is a good person. He has a lot of controversial interviews out there, of that there can be no doubt. But I’ve also seen a lot of really heartfelt interviews from him. Once you get past the “King Mo” character, Muhammed Lawal is a well-spoken, very intelligent, very interesting person.

He’s also only 31 years old, which is one of the main reasons why I wish him nothing but the best and I really hope he’ll be able to come back from all this adversity. I think King Mo does deserve a second chance, and I think he is definitely one of the best Light Heavyweight fighters not currently competing in the UFC.

But like so many other fighters, I honestly wonder how all this will affect Lawal’s performances in the future. It’s always a fantastic story when an athlete returns after facing so much adversity, but the reality of the situation is that some fighters are never the same. So not only do I hope to see Lawal back in the cage one day, I hope that he’s able to return to form as well.