In Flames Interview: Peter Iwers Speaks Up About Old Vs. New In Flames & More 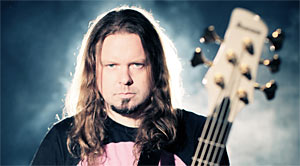 We caught up with Peter Iwers of In Flames recently to talk about the current tour, the new album, old versus new In Flames, his influences, and some other random shit. We would have given you a video interview, but our camera man was accosted and mugged by a group of transvestite hookers in the subway system. See, he gave them a curious eye and seeing an opportunity proposed a “film” idea to them. They didn’t take kindly to the idea, stripped him naked, sodomized him, and took his equipment. So now Yell! Magazine has to give you an audio interview, which is better than a transcribed interview, so stop complaining.

As the hour of our interview approached, In Flames’ tour manager called me to ask if we could move the location of the interview. See, Peter Iwers is a huge hockey fan and he wanted to watch the game that night. Since the concert venue didn’t have a television for him, he had to go to a nearby sports bar, which is where I met him and Bjorn Gelotte. Bjorn offered me a beer a couple of times, but professionalism dictated that I refuse. I apologize in advance for all the background noise in the interview, it was a sports bar after all. Hope you enjoy it, nonetheless.