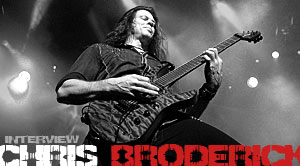 After our interview with Lacuna Coil’s Andrea Ferro at Gigantour 2012, we were asked to wait backstage, near Megadeth’s operations room, which was near the main entrance from the garage. We ended up chatting with the guard on duty, who was a really young guy who couldn’t visually tell the difference between the metal performers and the roadies. It was quite amusing seeing Dave Ellefson and Shawn Drover arrive at the venue and watch the guard stutter out, “Ah, excuse me, do you have a pass?” To which a roadie quickly replied, “They’re in the band.” Same thing happened when metal god Dave Mustaine arrived with his sweet-smelling arm candy.

But, I can’t get down on the security guard too much; Volbeat could have walked past me and I wouldn’t have known them from an emo kid needing his overgrown Justin Beiber hair cut. After awhile, we were escorted to the Megadeth interview room to wait for our interview with Chris Broderick. The room was adorned with walls, sports memorabilia, and antiquated wooden trim, among other things, instead of black curtains squaring off an area. There was a queue of media types waiting for their interview, as a couple different interviews were conducted simultaneously and one right after the other. It wasn’t as intimate as we’re accustomed; it was sort of like getting a lap dance in a strip club – everyone could see and hear the goods you were getting.

In our interview with Chris Broderick, we learned what his first guitar was and why he regrets not having it anymore, and we tried to get him to talk shit [Editor’s note: we meant to convey some kind of humor with this comment, but there are some who are taking this a bit too literally] about Dave Ellefson, but it didn’t exactly play out the way we wanted it to.