What’s Next For The Winners And Losers Of “UFC On FUEL TV 1”? 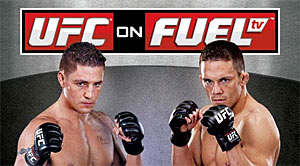 “UFC on FUEL TV 1” was a fun night of fights from the start of the show all the way to the main event. Now once again it’s time to ask: what’s next? What does the future hold after several dominant and heart-felt performances by a variety of UFC talent? Here’s my answer to just that: a new edition of my “What’s Next for the Winners and Losers” series of articles, now featuring “UFC on FUEL TV 1”.

Each other, which is why I’m grouping them together. Both men had pretty entertaining performances, with Menjivar finishing his opponent and Dillashaw dominating his opponent for three rounds. Both men line up with each other pretty well in terms of both fighting style and divisional ranking, so I’d love to see this match.

Imagine a fight between Stipe Miocic and Pat Barry? Now that’s a fight I’d love to see. Miocic vs. Barry would be all kinds of crazy, and somebody would probably get KTFO’d. Aside from Barry, Miocic could face the regular cast of characters that are traditionally used as Heavyweight gatekeepers: Stefan Struve, Roy Nelson, Cheick Kongo, etc.

I’d like to see Ronny Markes go up against Demian Maia. Maia’s basically the #1 gatekeeper in the UFC’s Middleweight division right now, and I think both men could beat each other. This would be the biggest name/challenge Markes has faced in the UFC to date, but at 13-1 and with a six-fight win-streak, I think Markes has earned his shot at divisional relevancy.

How about a rematch with Roy Nelson? I definitely think that would be an interesting fight to see. It makes a good amount of sense too: by the time this fight got around to happening, it’ll have been over two years since their first fight. Struve is 4-1 in his last five against good competition, while Nelson is 2-3 in his last five against some of the best competition the UFC has to offer. Nelson is also 1-3 in his last four, so his job may be on the line in his next fight. At least to me, this rematch definitely makes sense. Sanchez will do what he always does: he’ll refocus, go back to training, and eventually he’ll come back and win a few fights. In all honesty, Diego Sanchez is beginning to remind me more and more of Kenny Florian. I don’t think Sanchez will ever lose enough fights in a row to get kicked out of the UFC, and I think the UFC will give him a lot of leeway even if he does lose a few in a row since his fights are always so entertaining. Whether it’s at Lightweight or Welterweight, I predict that Sanchez will remain one of those “top of the middle” and “bottom of the top” guys.

Josh Koscheck perhaps? I’d certainly be interested in seeing that fight. No matter what, Ellenberger is ready for his shot at a Top 10 opponent. He already knocked out a Top 10 in Jake Shields (Top 5 even!) and he just went through one of the division’s best gatekeepers. I’m hesitant to make a definitive “Ellenberger has arrived” statement, but I do think that if he continues to live up to his potential, Jake Ellenberger will be fighting for a championship in 2013.