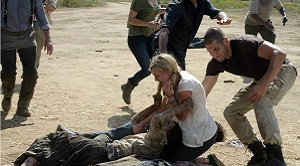 Look, everyone: wide shots! Eleven weeks have passed since the last episode of The Walking Dead, and the new creative team is finally ready to leave its own mark on the series, free of Frank Darabont’s vision. Of course, for our heroes, Rick only just blew Sophia’s zombified brains out. As such, “Nebraska” largely deals with the psychological fallout as each character takes stock of what happened, why, and how it affects their future. We also get some clever misdirection, but I’ll get to that later.

For now, let’s focus on the person who’s lost the most in this tragedy. No, I don’t mean Daryl, though the man seems shaken to the core. After all, most of his character growth this year stems from his search for Sophia, so it stands to reason our heroes’ utter failure would set him back a few notches. That the hillbilly tracker would refuse to fetch people for Lori (can’t she drive herself… Oh, wait) is to be expected, but I’m saddened he’s chosen to isolate himself from Carol as well. Daryl needs this tribe, and she’s his only connection to it.

Mind you, I doubt Carol would offer much comfort as the mother of the deceased. The parallel between her near catatonic state and the walker plague seems fitting, reinforcing my theory that the show’s title, The Walking Dead, refers to our desperate heroes, not the roaming corpses. I also dig the tender moment with Shane washing her arms and apologizing in his own awkward way. I suspect the sheriff’s deputy is mostly checking for bite marks at this point, but at least he’s being gentle about it.

On a related note, Dale makes valid points about Shane, but I’m starting to wonder how much personal baggage is factoring into the equation. Consider his constant attempts to turn the group against the former law enforcement officer, the way he grounds his assessment in personal experience: “I knew guys like him!” Are we headed toward a sordid Dale flashback? Either way, the old man may yet sway Lori, who worries her son is hardening too fast. We know what kind of person Carl becomes in the comics, and that takes place in a world where Deputy Walsh hasn’t got much influence on him.

It’s not all piss and vinegar, mind you. For example, the tragedy has brought our favorite interracial couple even closer. Glenn’s confession in the car brings much needed levity to the episode, so I’ll spare you the rant about Asian men only finding love onscreen if humanity has literally been decimated and women have limited options. At any rate, our heroes will eventually leave the farm, and I hope Maggie comes along. However, I can’t imagine she’d abandon her father now that he’s lost everything. This doesn’t bode well for Hershel…

Then again, maybe Maggie’s the one in trouble. We all know happy couples don’t last on television, and Beth looks suspiciously like she might have got bit or scratched outside the barn. Worse, perhaps her sudden illness comes from the water supplies being contaminated after the bloated walker from “Cherokee Rose” got Darth Mauled and fell into the reservoir. Whatever the reason, Hershel’s younger daughter attacking the remaining farmers as a flesh-hungry ghoul would make for a nice bait and switch, especially given Glenn’s recurrent role as potential cannon fodder.

However, that’s not the clever misdirection I mentioned at the beginning of the review. With its somber character beats and symbolic overhead shots, “Nebraska” goes out of its way to make us forget what our heroes have all neglected themselves: Rick’s state of mind after shooting a little girl he swore to protect. We may never find out whether Dave and Tommy from Philadelphia truly meant harm, but we know Deputy Grimes killed them in part because the burden of leadership is chipping away at his soul. “This isn’t about what we believe anymore,” he tells Hershel, “It’s about them.” Some might interpret this line as heroic. I mostly think it’s tragic.