Kingdoms Of Amalur: Reckoning Review – Or: How I Stopped Worrying And Learned To Love My Gnomish Frankenstein’s Monster 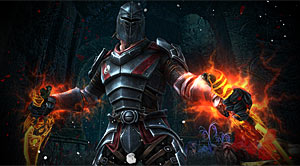 I’m chomping at the bit to get my hands on the eagerly awaited Mass Effect 3. However, since March 6th is still a ways off, I have to satisfy my craving for some RPG goodness by cheating on my beloved Mass Effect with the new, hot trophy wife on the block. Namely, Kingdoms Of Amalur: Reckoning, developed by Big Huge Games. With a name like that, I have a sneaking suspicion that they might be overcompensating for something. Clearly, Freud would have a field day with that hammer.

Kingdoms of Amalur is, without a doubt, overflowing with RPG candy. It’s a gigantic game, daring you to complete every main campaign quest, gather every piece of that armor set you’ve been drooling over, obtain every spell in every dusty tome located throughout the land, and its ample side quests lure you to darkened alleyways, where lusty treasure chests await the thrust of your lockpick. On an entirely unrelated note, I may be in desperate need of a girlfriend. My, what sumptuous pixels you have…

Dozens of hours of playtime beckon like sirens to the lonely mariner. Time to get my RPG on! Join me, your faithful chronicler as Yell! Magazine reviews Kingdoms Of Amalur: Reckoning, available for PC, PlayStation 3 and Xbox 360. For review purposes, the PC version was used.

Amalur starts your character off in a rather precarious position. No, he’s not surrounded by rape-happy goblins or amorous syphilitic goats. What? Oh, like you’ve never had to dodge catapult-launched suicide goats before. Geez, get out of the house once in a while. Anyway, our hero awakes after a pleasant slumber. Nah, I’m kidding, you were totally deceased and you wake up buried underneath a pile of rotting corpses. Not exactly a stirring entrance for our intrepid adventurer. Shortly, you’re told that your previously shuffled off mortal coil was the subject of an experiment by a gnome scientist to bring the dead back to life. We can rebuild him! We have the technology!

The laboratory soon comes under attack by the game’s main antagonists, the Tuatha, and your recently zombified character is forced to fight for his unlife. These early battles and exploration serve as the Kingdoms of Amalur’s tutorial, introducing the player to melee, ranged, and magical combat, as well as basic movement around the environment. Once you’ve managed to escape the doomed erstwhile Frankenstein’s castle, you encounter an NPC who dumps yet another head whammy on you: your miraculous resurrection has somehow severed the treads of fate of your character’s life. Every person in the game is bound to their unavoidable fate. Except you! Thus, it’s up to your fateless hero to save the world.

This sums up Kingdoms of Amalur‘s first hour or so. After that, the game world opens up. Towns, hidden caves, and NPCs with genre standard yellow exclamation points hovering above their heads litter the landscape. In keeping with your lack of pre-destined end goal, Amalur never really tries to hold your hand. You can tackle the main quest and be done with the game in a little over 20 hours, or you can travel off the beaten path and spend easily that same amount of time completing Amalur’s many optional diversions. Suffice it to say, Kingdoms Of Amalur is never short of anything worth doing. Whether you sign on for an hour or 10 minutes, the game caters to your needs. If those needs involve a little light bondage… well, what happens in Amalur stays in Amalur.