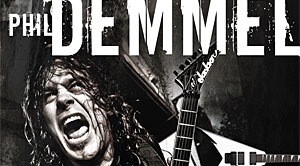 As promised, here’s our video interview with Machine Head’s Phil Demmel. You’ll see for yourself, but as we mentioned in our review of their show, Phil inadvertently gave Metallica the finger over pulling out of European tours in 2013. Admittedly, I kind of tricked him into doing it, but I’ll let you see it for yourself.

We interviewed Phil Demmel at the same venue that we interviewed Arch Enemy’s Michael Amott and Sharlee D’Angelo, yes the same backstage dungeon where we’re sure some bloodsport could go on. At any rate, I was wearing my KISS winter hat, which was the first thing Phil noticed and commented on. To paraphrase he said something like, you’re a KISS fan so you can’t be that bad. I wonder what kind of crappy interviews he was subjected to that day.

We tried to get you some dirt on what or who the track “Locust” is about and if there’s been any aftermath consequences to it. We also got you some upcoming Machine Head tour information, and a bunch more shit.

Crack a beer, sit back, and enjoy our Phil Demmel video interview, you plague.