Machine Head Eighth Plague Tour: A Band That Leaves It All On The Stage 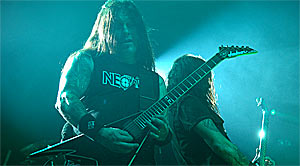 Machine Head tore shit up on the night Yell! Magazine saw them during their 2012 Eighth Plague tour, in support of their latest, Unto the Locust. Of course, something tragic would have to happen for a band of this kind of talent, of this kind of epic magnitude, and with 20 years of experience under its belt to put on a bad show.

In the meantime, check out our interview with drummer Dave McClain from summer 2011.

Take a seat, zip your traps, wake up, and take notes you emo, metalcore fucks; this is how you play metal with emotion and power. Machine Head purges emotion like a bulimic at an all-you-can-eat buffet. It’s an apparent fact after watching The Faces of the Eighth Plague video that Machine Head also helps their fans purge their hate, their pain, their isolation, their fear, and anything else that torments and haunts them. But the band accomplishes this without being whinny little bitches about it.

Machine Head is actually a tough act to pigeonhole as far as genres go. While it’s all metal, there are times that you get to hear some hardcore punk, thrash metal, groove metal, industrial metal, grunge, technical metal. Obviously their influences are run deep, but it’s a testament to their talent to be able to incorporate all of them while forging a unique sound and style. No wonder they have such loyal and dedicated fans. Fuck you if you don’t approve.

Machine Head is also one of those bands that has flown under the radar, despite being Grammy nominees. If you’re a metalhead looking for a kick-ass night of great metal, shell out the minimal cash and check these guys out; you’ll be as happy as an 18-year-old getting into a strip joint for the first time.

Whether it was by design or coincidence, the opening track on Unto the Locust, “I Am Hell,” serves as a perfect opener to the Eighth Plague tour. It’s always something to open with a calming, ethereal tone before blasting the audience with total power. It’s a rallying cry that gets the crowd into a frenzy.

While Machine Head played most of Unto the Locust, they did mix in some of their older material, including the Grammy-nominated “Aesthetics of Hate,” which the crowd rapturously embraced, and “Halo.”

Everything at the show was on-point, from sound quality to volume to the members playing their hearts out.

“I Am Hell (Sonata in C#)”
“Be Still and Know”
“Imperium”
“Beautiful Mourning”
“The Blood, the Sweat, the Tears”
“Locust”
“This Is the End”
‘Aesthetics of Hate”
“Old”
“Darkness Within”
“Declaration”
“Bulldozer”
“Ten Ton Hammer”
“Who We Are”