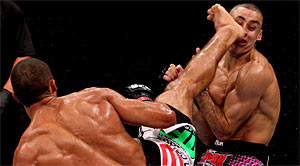 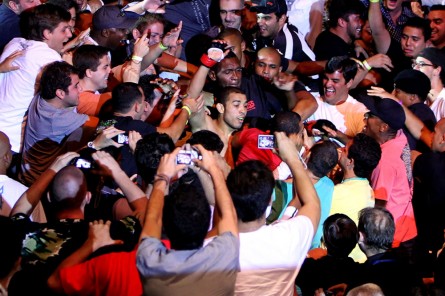 UFC 142 was a fantastic event, with every one of its Pay-Per-View fights ending in finishes and most of the preliminary action not seeing a judge’s decision either. But which stars shined brightest, and what moments will fans be talking about in the following weeks? Here’s my take on the matter: my top 5 best moments of UFC 142 “Aldo vs. Mendes”.

I’ll admit, Rousimar Palhares’ submission win at UFC 142 could just as easily take the number five spot on my list. But I’m giving it to Gonzaga because Gonzaga was coming in with a lot of questions surrounding him, while the only question really surrounding Palhares was whether or not he’d do something stupid again and cost himself an easy fight. Gonzaga’s return was a lot of fun to watch, I was a semi-fan of Gonzaga to begin with, and Gonzaga’s return opens up a lot of interesting possibilities at the middle level of the UFC’s Heavyweight division. So I feel pretty confident in giving him a spot on this list.

Let’s forget for a second that Erick Silva was very controversially DQ’d shortly after stopping Carlo Prater. Let’s instead focus on the simple fact that Erick Silva looked like a monster at UFC 142. Silva walked into the Octagon with a lot of confidence and even more killer instinct, which allowed him to drop and stop a very well-traveled veteran. The controversy surrounding the outcome of this fight shouldn’t overshadow how amazing Silva looked for the few brief seconds he was in the Octagon. I’m definitely going to be keeping my eye on Erick Silva.

What can you really say about this fight other than “WOW”? I picked Terry Etim to win this fight by submission, but Edson Barboza’s vicious leg kicks kept him at bay and sapped his takedown ability. The fight itself was a good three-round war, but Barboza’s epic KO that came out of nowhere was easily one of the highlights of the night and quite possibly a “KO of the Year” contender.

No.2 Vitor Belfort choking out an overweight Anthony Johnson

Although Barboza’s wheel kick KO was the most spectacular finish of the night, I’m putting it at the number three spot because both this fight and my top pick had a lot more of an emotional payoff based on the stories surrounding the fights. Seeing Vitor Belfort win in Brazil is awesome enough, seeing him beat an overweight opponent that almost beat him was even better. Vitor Belfort continues to shine in the UFC, and I continue to enjoy watching him each and every time he steps into the Octagon.

No.1 Jose Aldo knocking out Chad Mendes with one second left on the clock

For my money, Jose Aldo sprinting out of the cage and leaping into the crowd will stand the test of time as one of the greatest post-fight celebrations in MMA history. It just doesn’t get much better than finishing an opponent beautifully with only one second left on the clock. My faith in Jose Aldo waned a bit leading up to this fight, but now I think Jose Aldo will become one of those fighters that I never bet against no matter what. This was an amazing victory, and definitely the highlight of the night.