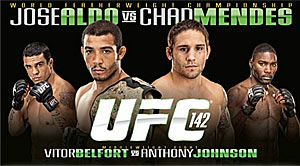 On January 14, 2012, the UFC will hold its highly-anticipated “UFC 142: Aldo vs. Mendes” event, featuring UFC Featherweight Champion José Aldo defending his belt against the unbeaten Chad Mendes. Also, Anthony Johnson moves up in weight to Middleweight and will fight former UFC Light Heavyweight Champion and former UFC Middleweight Championship challenger Vitor Belfort. Still, some fans may be asking themselves: what are the best reasons to check out this card? Here’s my answer to just that: 5 reasons to watch UFC 142: “Aldo vs. Mendes”. I’ve always been a semi-fan of Gabriel Gonzaga, and long-time readers of mine will remember that the “UFC Prelims LIVE” events are my new “dark horse favorite”, the events and/or promotions that I keep rooting for and keep trying to convince more people to watch. These are good fights, fans and friends. You really should watch them if you have the time and the opportunity. Some of the UFC’s prelims even put other show’s main card fights to shame.

4. The strange tale of Rousimar Palhares continues at UFC 142. Ever since his heartfelt performance at a Strikeforce Challengers event, Carlo Prater has been one of my “dark horse favorite” fighters. I’m very glad that he’s been given a shot back in the UFC, and I sincerely hope that he’s able to turn this run into something special. But he’s got a big mountain to climb in this fight: Erick Silva is unbeaten and has finished his last four opponents. With a combination of emotional investment, a talented veteran, and a fierce prospect, this is one fight I’ll be paying extra-close attention to.

2. Anthony Johnson vs. Vitor Belfort has “Knockout of the Night” written all over it. I cannot wait to see this fight. This fight is not only worthy of co-main event status, I think you could make a serious case for this fight being worthy of main event status for an international Pay-Per-View, and definitely a “Fight Night Live” event. Anthony Johnson is a great wrestler and a dynamic striker, while Vitor Belfort continues to prove that Middleweight is where he belongs and a rematch with Anderson Silva is what he deserves. Both my head and my heart agree that someone is going to get badly KO’d in this fight.

And the number-one reason to watch UFC 142 is…

1. If anyone can beat José Aldo, it’s Chad Mendes. If this was a few years ago, the idea of José Aldo not being able to finish anybody would be laughable. But Aldo is now two fights into his Octagon run, and twice he’s been unable to secure a finish. Even worse, he’s lost at least one round in both of those fights. And while Chad Mendes hasn’t finished anybody lately either, he’s still an unbeaten prospect and definitely the number two star in his division. This is a close fight that could go either way.

So there you have it, fans and friends: five great reasons to tune in and see UFC 142.