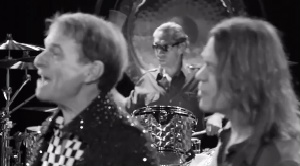 It’s pretty hard for Van Halen to fail, unless it involves Gary Cherone. And the first single off of the upcoming A Different Kind of Truth, “Tattoo,” is far from failure. While it seems to miss the raw energy of pre-Sammy Van Halen, it is solid and tight. Seriously, when you put those talents together, is it going to be anything but? Besides, Van Halen has to be commended for sticking to their sound, avoiding trying to sound young and relevant. And they are still light years ahead of younger up-and-coming musicians in the talent department. Van Halen just knows what they’re doing, and it shows.

Check it out for yourself: Eddie’s solo is as tight as ever, Alex is as solid as ever, Roth is as showman-y as ever, and, well, Wolfie is proving himself totally capable.

A lot of people might be asking “Why?” “Why a new Van Halen?” “Why a reformed Van Halen with David Lee Roth?”

Despite all the drama, despite the endless Hagar vs. Roth debates, despite the absence of Michael Anthony, despite a $93 million tour in 2007, despite Gary Cherone, despite most fans having written the band off, Van Halen owed this reunion and new album with Roth to the fans. In fact, it’s the first dignified thing the brothers have done, at least publicly, in years. Most fans had grown tired of the bickering, tired of the Rock and Roll Hall of Fame absenteeism, and for the first time in years, it looks like Van Halen is having fun, which will undoubtedly translate into an awesome live show.

Whether fans favor Roth or Hagar, we’ve always wanted this – a new album with Roth, and A Different Kind of Truth is gonna get heavy rotation. Fans have been patient and tolerant, and as a fan myself, I’d like to say Thank You, Van Halen.