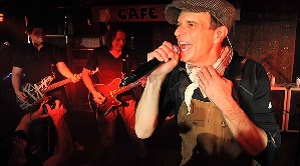 “Welcome to occupy Van Halen, ladies and gentlemen,” announced Diamond Dave before the band launched into “You Really Got Me” (see full set list below) at the small New York City club Cafe Wha? on January 5th. Roth looked right at home with his old bandmates (minus Michael Anthony). Roth has always seemed to be eager to be with this band, and at this show, for the first time in a long time, the sentiment seemed to have been reciprocated. Everyone in the band looked happy to be there and together.

Yell! Magazine apologizes for the low-quality video; we weren’t there and it appears that journalists in New York only bring smartphones to concerts.

A couple facts about the new Van Halen album:

1. A Different Kind of Truth is the title
2. “Tattoo” and “She’s The Woman” are among the most talked-about tracks on the album so far (see the full track list below)
3. At least one song on the upcoming album, “She’s The Woman,” is a tweaked version of a demo from “the” Roth era
4. Wolfie seems to have really come into his own as a bass player, but it’s hard to imagine him downing a fifth of Jack on stage anytime soon