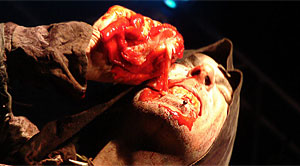 The first thing that comes to mind when I see or hear Noctem is pure post-apocalyptic hell. Born in Spain’s wastelands, if Mad Max had to face a new nightmare, it would definitely be Noctem. The only difference is that the battlefield wouldn’t be on the roads, but live, on stage, where Noctem could unleash their ruthless, savage, and spectacular metal performance. If you don’t believe this hype, and need some evidence, just watch their latest video for “The Arrival Of The False Gods.” It won’t disappoint. The Henry Menacho-directed video also proves that the band can be both extreme and entertaining in a live show.

Noctem is still currently touring parts of Europe, and you can find some tour dates below. We only hope we can catch them very soon in North America since they recently joined forces with Metal Blade Records.

Noctem’s latest album effort, Oblivion, continues to receive praise from various metal sources, and we hope to give a full pass on the entire album very soon since this track has already lured us into wanting more, and I guarantee it will have the same effect on you.

Check it out, and let us know what think of Noctem’s live performance.

A Few Words From Noctem About The Video:

A lot of people are wondering about how is a Noctem’s live performance, for that reason we wanted to reflect it in the first video for Oblivion. “The Arrival of the False Gods” is the elected track, with no doubt one of the hardest and fastest songs we ever created, 240 bpm blast beats and double kick, sharp guitar riffs, impervious bass lines and wild and ravenous vocal lines; so it was perfect to represent the energy and chaos that the band spreads on stage.”

“We’re constantly thinking about different ways to give something new to our fans and this was the perfect situation to show to the metal world what Noctem does live.”